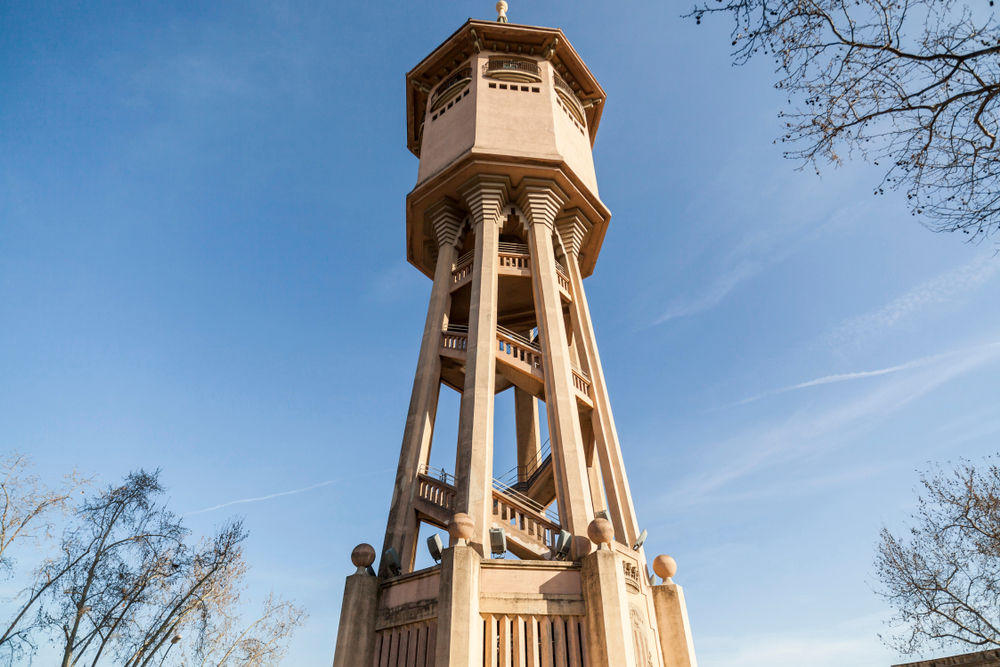 Seeing the area’s fauna, tasting the local cuisine… and, of course, historical tourism. Are you someone who loves that last one? If you are, then Sabadell will become your new favorite place, because it has a ton of places where you can explore the city’s history! Today, we’ll talk about the best historical monuments to see in Sabadell.

If there were just one historical place of interest in Sabadell, it would be the Torre de l’Aigua. Due to the population boom in the city during the 1920s and the resulting problems with water supply, this water tower was built in a spot that was perfect to collect the water extracted from the wells of Ripoll.

The tower was built in 1918 and began operations in 1922. Due to the construction of the new water supply system, it stopped being used in 1967. Nowadays, it is illuminated at night with beautiful lighting.

Whenever you visit a new city, you should always visit the town hall, because it’s usually one of the oldest buildings in the city. This one was built between 1871 and 1872 as a school, until it was acquired by the municipal government in 1880 and they turned it into their main headquarters.

What was once the old school playground is what is now called the Plaza del Ayuntamiento. The town hall was built in the neoclassical style with pinkish tones on the façade, with a beautiful clock and four Tuscan columns.

This iconic building in the city of Sabadell belonged to the Turull family, a rich local family who opened the doors to this factory house in 1819. It is divided into two parts: the living quarters of the owners and the textile factory.

It is the only one of its kind that remains in Sabadell. Today, it is home to the city’s art museum.

Perhaps one of the oldest buildings in the city, dating back to the 16th century. It was the home of Feliu Duran, an important figure in the city during the 17th century. Inside, you’ll find a beautiful chapel and a Renaissance altarpiece, as well as priceless works of art. This monument is considered a National Historical Monument.

The era of industrialization left behind several buildings in the city, among which is the Vapor Buxeda Vell. This factory was built in the mid-19th century as an initiative of the brothers Miquel and Domènec Buxeda. It was designed to manufacture wool products.

Notably, it became the first building in the city to have electric lighting generated by steam turbines.  Today, only the machine room survives, in which you can see a Wolf semi-fixed steam engine, and the boiler room. It is currently the headquarters of the Museo de la Industria de Textil Lanera.

Antoni Casones was the mayor of Sabadell in the 19th century, and he ordered this mansion to be built in 1859. The building was the work of the architect Josep Antoni Obradors, and it was built to be part residence and part industrial building.

After the mayor’s death, this building was converted into the courthouse, the bank La Caixa d’Estalvis de Sabadell, and the industrial school. After 1931, it became the city’s museum. Today, it is used as the city’s history museum, Museo de Historia.

Although it is popularly called by this name, it is also known as Casal Pere Quart. It is manor house located on La Rambla, and it was built by the family of writer Joan Oliver Pere Quart in 1865. After the Spanish Civil War, the building was requisitioned by the Movement and became the headquarters of the La Falange political party and the Spanish Youth Organization (la OJE). Over the years, it has also been used as the headquarters of Radio Juventud, the Diario de Sabadell newspaper, and the municipal music school.

After the transition to democracy, the building was turned into the Town Hall. In 1982, it was reformed and converted to the headquarters of the Youth Information Service and Commerce for Linguistic Normalization. It contains exhibit halls, an auditorium and an assembly hall.

Who would go to visit a city as a tourist and leave without seeing its theater? This one is the work of Frances-Daniel Molina. Opened in 1866, the interior decoration is baroque and was done by Barcelonan painters and scenographers Marià Carreras Vila and Joan Ballester i Ayqual d’Izco.

The work of architect Juli Battlevell, this building was built in 1908. With a modernist style and a façade decorated with huge stone roses as capitals on the columns, it is used nowadays for resident public services.

Do you like modernist art? Then you’re going to love visiting the Caixa de Sabadell building. This work by the architect Jeroni Martorell was built in 1915. A building with unique architectural and artistic value.

Although it was built in the 11th century, over the years it has been remodeled, with the addition of elements from the 13th and 18th centuries. The building is notable for its late Roman style bell tower, as well as for its three floors and the baroque decoration of the interior façade, below which is a great medieval necropolis.

This church is also known as Los Padres, with a neoclassic style. Built in 1832, it is noted for its four Ionic columns and cream-colored tones. The composition is perfectly symmetric. It was the work of architect Antoni Cellés, and was acquired by the Claretian missionaries in 1899. The sculptures on the façade are from 1949.

How about a little tour of the city’s only cemetery? Artistically speaking, it’s the best one in the entire Catalonian county of Vallés. Built in 1864, it is located on the outskirts of Sabadell. Inside, you will find a church from the late 19th century, with a beautiful cupula decorated with sculptures which make allusions to judgment day.

The cemetery is full of mausoleums and sculptures of important artists, such as Franz Metzer, Joan Brull and Eugènia Balcells. The funerary works of the gravestones are in diverse styles, the perfect convergence of modernist, Noucentisme and romantic styles.

According to documentation, this church was built in the mid-10th century, and consecrated in 1054. However, researchers say that the remains of a rectangular basilica that belonged to a Roman villa in the first century B.C. have been found in the area. The building has a rectangular floor with an apse in the eastern section and a square bell tower with a pyramidal roof in the northern section.

Built in 1738, right next to the church Iglesia de Sant Fèlix. Baroque style, with an octagonal floor and four segments. The first three are stone, and the last one is fired clay brick. The original project was the work of architect Joan Garrido, who thought that the bell tower needed to be even taller.